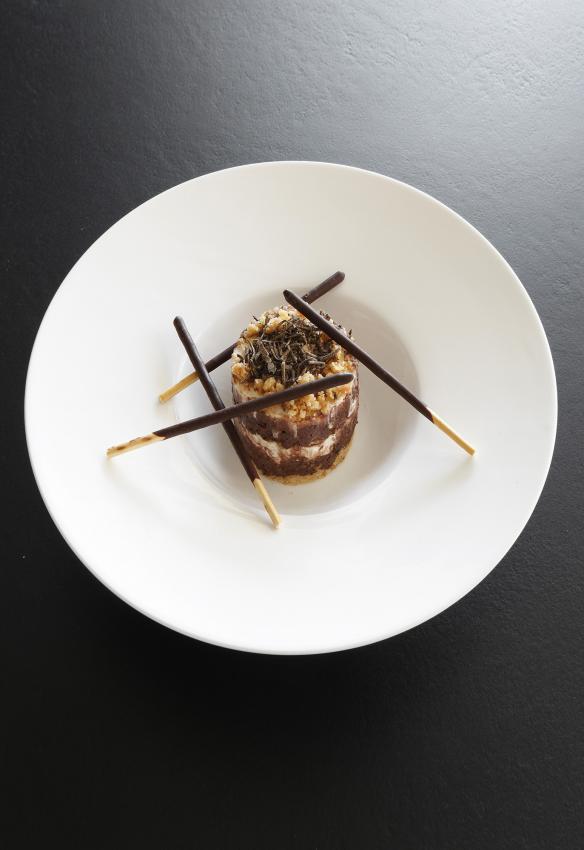 The mousse.
Take 3 eggs, 125g of ‘cooking’ chocolate 70% cocoa, 10g of unsalted butter, 125ml of full fat cream and 35g of caster sugar.
Separate the egg whites and yolks while they are cold. Place the whites in a large bowl and yolks in a small bowl. Leave whites aside.
Whisk the yolks.
Place chocolate and butter in a bowl. Melt in a bain marie, stirring until smooth. Set aside to cool.
Beat the cream until stiff peaks form.
Add the sugar to the egg whites and beat the whites until firm peaks form.
Fold the egg yolks into the cream using a rubber spatula and add the chocolate (which should be runny and lukewarm).
Mix the egg whites mixture into the chocolate mixture in half at a time. Turn a few times. Avoid over mixing.

Crumble.
Take some shortbread biscuits and put them in a plastic bag. Using a rolling pin reduce the biscuits to small (not too fine) pieces. Melt a knob of butter and mix it into the crushed biscuits.

Serving.
Place a cookie cutter form in the centre of the plate. First put a layer of crumble, followed by a layer of chocolate mousse, followed by a layer of marscapone cheese (each time you put in a layer, use the cookie cutter form press tool to flatten and compact the current layer before applying the next. You will need to clean the press tool with warm water each time so it doesn’t stick to the mixtures - clean, press, swivel and remove). Then you put another layer of each component, finishing with the marscapone. Sprinkle some crumble over the top of the marscapone - press, swirl and hold it in place whilst you remove the cutter form from the dessert.
Sprinkle with a thick layer of grated truffle and decorate with the Mikado sticks.