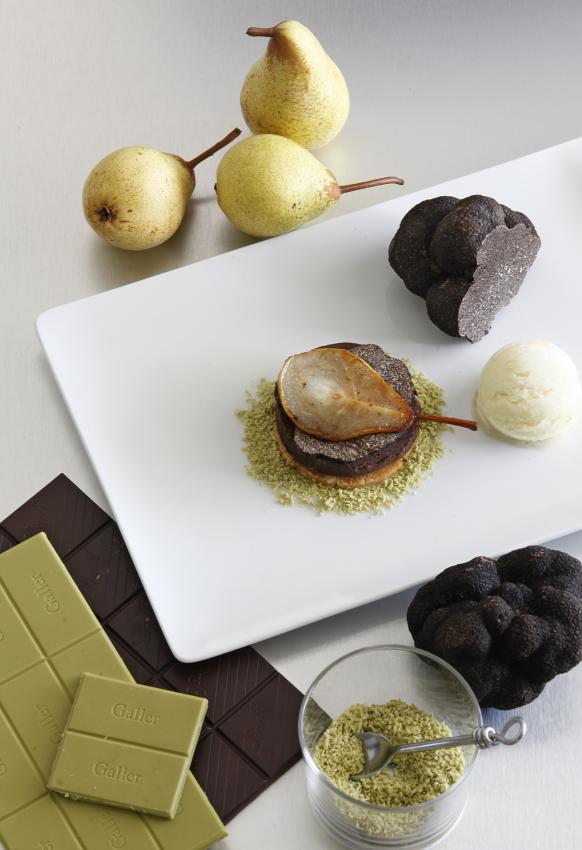 No bake chocolate mousse.
450g of chocolate (i have used a mixture of pear chip chocolate and cocoa chip chocolate. 50/50, as the recipe is to go with pears, and the chips add texture to the mousse.
720g of heavy cream.
half a teaspoon of salt
1 tablespoon of vanilla extract.

Lay the chocolate in a bowl, cut into small pieces. Heat 240g of heavy cream with the salt until hot (not boiling). Pour it over the chocolate and let stand a couple of minutes. Add the vanilla extract and whisk till smooth. Set aside to cool.
Using a mixer with a whisk attachment, whisk the remaining 480g of heavy cream until it has stiff peaks.
Gently fold the chocolate mixture in. Pour into cookie cutter forms lined with greaseproof paper to set them in circles of about 2cm to an inch high. Keep them in the cookie cutter forms until cool after refrigeration.

Pears.
Cut the baby sweet pears into slices lengthwise. (To keep the shape of the pear you will need to only use only those slices around the centre). Fry in a pan with a little sugar until they start to be saturated by the oil. Let aside (they wil become softer as they sit so dont overcook).

Crumble tart base.
Take some shortbread biscuits and put them in a plastic bag. Using a rolling pin reduce the biscuits to small but not too fine crumble size pieces. Melt a knob of butter and mix it into the crushed biscuits. The butter is the element that will solidify the mixture for the tart base. Put the crumble mixture
into cookie cutter forms and push down well to compact them so they make a solid form. Leave them in the cutter forms and refridgerate. You can take them out of the cutter forms after an hour once the butter has solidified.

Serving.
Place the crumble on the plate. Add the chocolate mousse and top with truffle slices and the caramelized pear. Grate the green tea chocolate and dress around the tart. Place the pear sorbet at the last moment before serving.