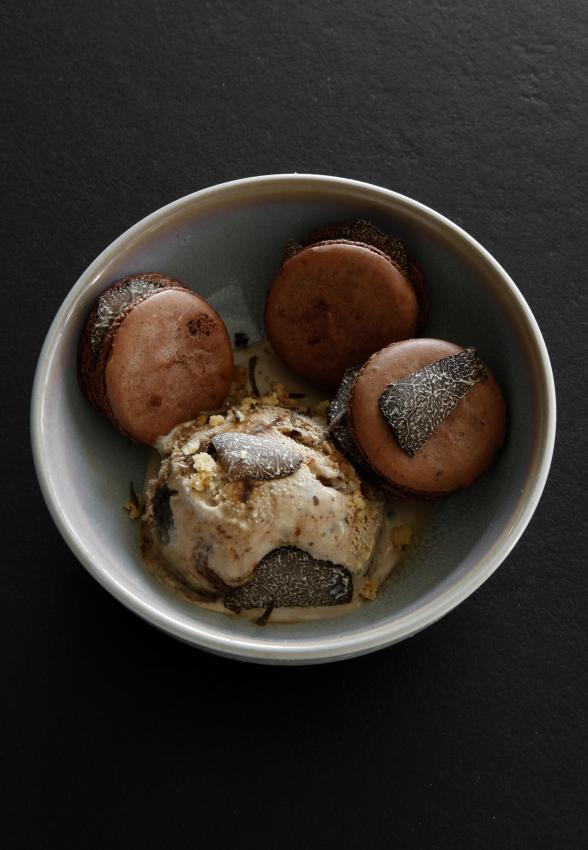 Macaroons.
100g of chocolate, 120g of icing sugar, 60g of almond flour, 2 egg whites, a knob of butter, a touch of salt.
Heat the butter and mix it into the almond powder.
Heat the oven to 180°. Melt the chocolate in a bain marie. Mix 80g of the icing sugar with the almond powder. Add the warm chocolate.
Beat the egg whites until the points stand by themselves and add the rest of the icing sugar whildt stirring until it is smooth and shiny.
Mix both the mixtures together. Pour the final mixture into the macaroon moulds and cook for 10 to 12mins.

Crumble.
Take some shortbread biscuits and put them in a plastic bag. Using a rolling pin reduce the biscuits to small but not too fine pieces. Melt a knob of butter and mix it into the crushed biscuits.

Serving.
Put the macaroons together filling them with a touch of chocolate mousse to hold them together and slices of truffle in the middle.
(If you want to make the chocolate mousse for the filling the recipe is below, but as you will need very little you can just use a good quality chocolate mousse from the shops).
Put a large ball of ice cream in a bowl and add three macaroons, sprinkle with crumble and place some sliced truffle.

The mousse.
Take 3 eggs, 125g of ‘cooking’ chocolate 70% cocoa, 10g of unsalted butter, 125ml of full fat cream and 35g of caster sugar.
Separate the egg whites and yolks while they are cold. Place the whites in a large bowl and yolks in a small bowl. Leave whites aside.
Whisk the yolks.
Place chocolate and butter in a bowl. Melt in a bain marie, stirring until smooth. Set aside to cool.
Beat the cream until stiff peaks form.
Add the sugar to the egg whites and beat the whites until firm peaks form.
Fold the egg yolks into the cream using a rubber spatula and add the chocolate (which should be runny and lukewarm).
Mix the egg whites mixture into the chocolate mixture in half at a time. Turn a few times. Avoid over mixing.