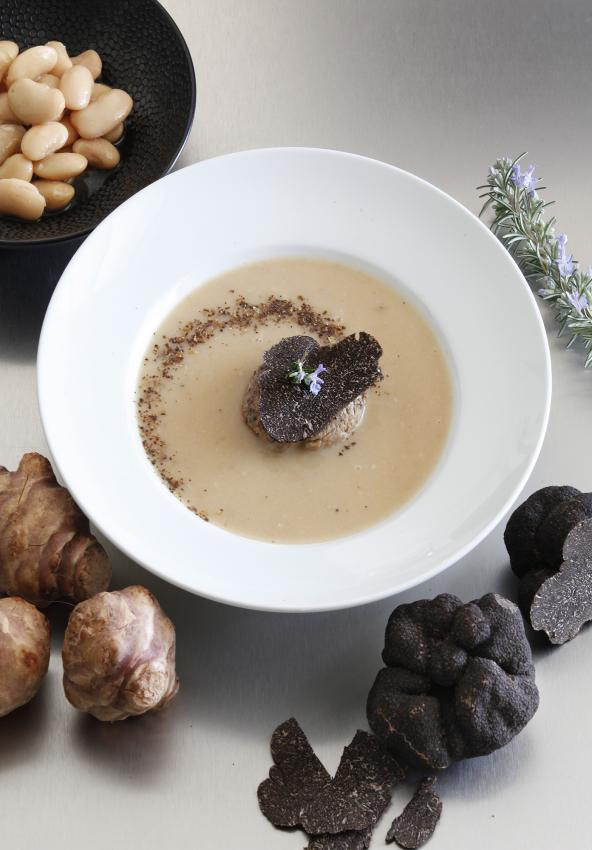 The soup.
Measure equal quantities of butter beans and Jeruselam artichokes.
Mix the butter beans in a mixer until you have a fine pulp. Slice and fry the Jerusalem artichokes slowly turning them frequently until they are soft. Put the Jerusalem artichokes in the mixer and reduce to a fine pulp. Put both pulps in the mixer with a little veal stock and mix until you have a thick soup texture. Add pepper and salt to taste.

The veal.
Cut into thick circles (1-1.5 inches) and cover in olive oil, salt and pepper.
Put into a non-oiled pan on high heat. Cook for a few minutes on each side and sear the edges.
Take off the heat, put the fillets onto a plate, cover with silver foil for a few minutes until the natural juices come out of the meat.

Serving.
Place the veal in the plate and pour its cooking juices over it. Pour the bean and jerusalem artichoke soup around the veal.
Grate some truffle, add a little salt and pepper and decorate on the soup surface.
Cut a big slice of truffle and place it on the veal fillet along with some rosemary flowers.